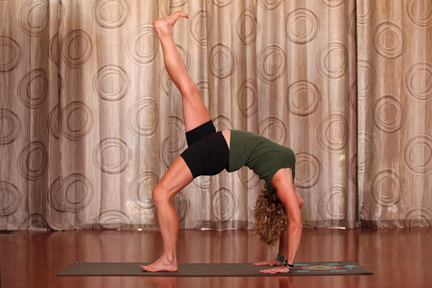 She is a native of Louisville and enjoys athletic activities such as bicycling, volleyball, walking, and hiking. In December 1987, she graduated from University of Louisville Speed Scientific School with a Master of Engineering and she also married her husband, Ed Stottmann. After working as an engineer for five years, she chose to stay home with her three children. She discovered her passion for teaching while attending music classes with her children. She taught music to 200 preschool and kindergarten aged children for 16 years. She became interested in yoga when one of her daughters did yoga for physical therapy and she has been practicing Anusara Yoga since 2006.  She received her Anusara-Inspired 200 hour status in 2009 and became a Certified Anusara 500 hour teacher in May 2013.  She is Yoga Alliance Extended RYT-500 hour licensed, a Yoga Alliance Continuing Education Provider (YACEP), and the lead teacher for the 200 hour Anusara teacher trainings at the studio.  She has completed the Roll Model Method and Science of Rolling massage ball training with Yoga Tune Up.  She continues to enjoy her study of all aspects of yoga through her practice and attending ongoing trainings.

Denise is inspired by sharing the connections she continually makes between science and math and the body, mind and heart.  If you happen to miss Science Friday on NPR, not to worry, Denise will fill you in on the mat! She continues to be amazed at how the alignment principles continue to benefit her varied athletic endeavors and how the heart qualities of Anusara Yoga inspire her in both her professional and personal life.  She loves to help others discover the therapeutic and healing properties of yoga. She teaches studio, corporate, and private classes.